The Diary: Mature Times & The Man Who Ate A Zoo 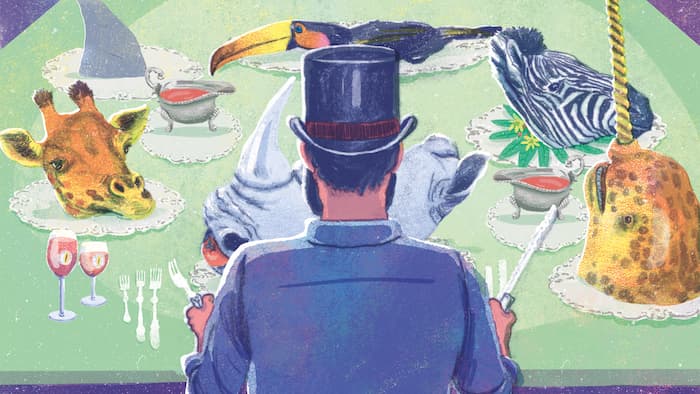 At the reception desk of a hotel to which I checked in this week was a pile of free copies of the Mature Times, which calls itself “the voice of our generation”. Oh God, I thought, the cheeky bastards are including me. Back off. For this must be the most unfashionable publication in Britain. Who wants to be called “mature”, like an old cheese? We all know that “mature” means on the verge of incontinence, idiocy and peevish valetudinarianism. They might as well have named it the “Surgical Stocking Sentinel” or “Winceyette Weekly”.

Mature Times directs itself to the over-fifties — a huge and growing potential market, there being almost 12m people aged over 65 in the UK alone. The paper is adorned with advertisements for hearing aids, recliner chairs, copper insoles, stairlifts, devices to help you in and out of the bath, and Your Life After Death, a book written by someone called “Joseph” who, apparently, is dead. I should rather be keeping company with Joseph than looking forward to any of these products: why do the people who run these dreary publications assume that, apart from a cruise somewhere in the company of other virtual corpses, this sort of stuff is all we want?

What I was unaware of, though, is how cross they assume old people to be. The front page headline asks, “Are baby boomers to blame for all society’s ills?” Well, they may not be responsible for much football violence or teenage drinking but the article wonders why older voters are accused of selfishness in voting to leave the EU. The answer to that is that all votes are selfish: that is the nature of democracy. And it is unarguable that research shows the life expectancy of those who voted to leave is much lower than the life expectancy of those who voted to stay. It’s simply not fair to allow people to vote for a future they won’t live to enjoy or endure. The case for curtailing the franchise is undeniable.

The following day I was having lunch in a pub in Cheshire. As usual, the only other customers were elderly (the grey hairs who spend their pensions keeping the business alive really deserve a statue erected in their honour — I suggest a decrepit person with a stick, trailing streams of £20 notes). I wonder whether the young people serving them the liver and chips upon which they had settled after 20 minutes’ dithering ever wonder about the fairness of a system that decrees they must pay taxes in order to fund their customers’ meals out.

The foursome at the table next door managed to sustain a 30-minute discussion about the temperature at which they ran their washing machines. It was a close-run thing, but the 60-degree cycle won out in the end. That was followed by observations about how many vests were worn in an average week. (Two, it turned out.)

No politician dare offend this whiffy vested interest, and, yes, doubtless everyone lunching was someone’s parent, aunt or uncle. But really, what is the point? They have every reason to laugh at the way government after government has skewed things in their favour. Yet the most striking thing about rooms full of old people is how very little you see them laughing.

I was in Cheshire filming part of a documentary series for Channel Four about the influence that rivers have had on our history (about which more, at a future date, I hope). Looking for marsh harriers on a reed bed in the Mersey with David Norman, a delightful ornithologist from the local wildlife trust, our conversation turned to the rather pointless speed at which we have come to expect news to be passed on. In what way are our lives improved by learning of a court verdict, the launch of a new car or the latest Lib Dem policy on recycling at lunchtime instead of in the evening? Or even next week? It’s not as if we can do anything about it.

Professor Norman remembered reading of an incident in 1865 when Thomas Littleton Powys, the fourth Lord Lilford — he has been honoured by having a species of lizard named after him — climbed a tree to examine the nest of a red kite in central Spain. Kites are in the habit of decorating their nests with unusual objects (apparently, there are instances of pairs of knickers being discovered therein). Lilford retrieved a scrap of Spanish newsprint from the nest. From it, the tweedy aristocrat read the first news of the assassination of President Abraham Lincoln.

By chance, I happened to be reading The Man Who Ate the Zoo, a new and hugely entertaining biography of Frank Buckland, another extraordinary bearded Victorian naturalist, noted for his tireless pursuit of new things to dissect and eat. Buckland was baffled that of the “140,000 species” on earth, only 43 ever graced the dinner table. In single-minded pursuit of more to eat he chomped his way through most of the creatures he could lay hands on, (elephant-trunk soup, fried viper, rhinoceros steak, roast giraffe and panther chops were just a few of the delicacies to feature on his smorgasbord). An inveterate self-publicist, he became the Kate Humble or David Bellamy of his day, though it speaks volumes about the different spirit of the times that a colleague claimed that “elderly maidens called their cats indoors as he passed by”.

He was finally brought low (or even lower, since a friend described him as being about four foot six in height, “and rather more in breadth”) by his devotion to aquaculture — he had braved freezing weather to collect salmon ova for shipment to New Zealand. He died in 1880, telling a friend, “I am going a long journey where I think I shall see a great many curious animals. This journey I must go alone.”