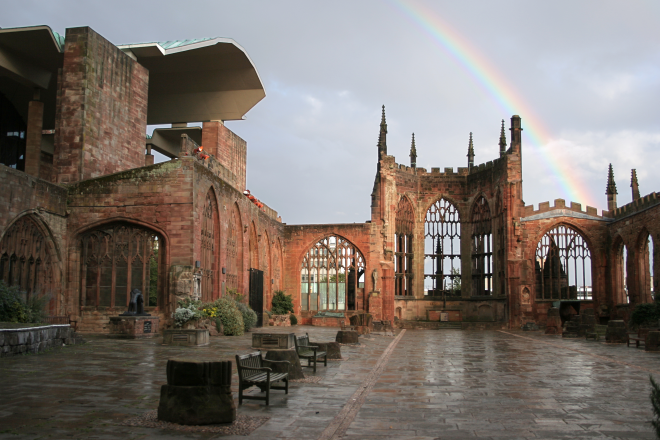 I hadn’t been to the cathedral in Coventry since I was dragged there at the age of 12 or 13 to marvel at what was seen as a wonder of modern architecture. I found it bleak and a bit dull. I now realise I was too young to appreciate it properly. For I went again last week, and it was magical.

The story of the Nazi firebombing of the wonderfully preserved medieval centre of Coventry is well known. But no amount of knowledge can prepare you for the sheer generosity of the response to this immolation. The cross of salvaged nails, the “Father Forgive” cut into the east wall of the ruins of the old cathedral, Epstein’s sculpture “Ecce Homo” are humbling.

Rubbishing modern architecture is a default setting for much of the British bourgeoisie, many of whom can summon up Prince Charles’ comments about a “monstrous carbuncle on the face of a much-loved and elegant friend” faster than a University Challenge student can hit their buzzer. The prince was talking about an unbuilt design for the National Gallery extension, and there is ample evidence to validate his prejudice: the Arndale shopping malls that began to disfigure town centres across the country from the 1960s, for example.

But Coventry’s cathedral, designed by Basil Spence, consecrated in 1962, and containing some absolutely stunning glasswork, is an exception. Graham Sutherland’s massive tapestry (it is the size of a tennis court) was controversial from the start and remains forbidding and off-putting. But the windows and woodwork are breathtaking. More than 50 years after its consecration, the cathedral retains its capacity to inspire awe.

Antipathy to modern architecture reflects the unease of a nation fearing its best days are behind it. I was at the cathedral for midweek evensong, at which the boy choristers outnumbered the meagre congregation two to one. Anglicanism, once so central to the English sense of identity, is reduced to a spectral presence in everyday life, while 1066 And All That reminds us that, by the end of the first world war, “America was thus clearly Top Nation, and history came to a .”

But the great thing about the cathedral at Coventry is its promise that somehow the future of the world might be better.

We’re in the midst of recording a new series of University Challenge, which has happily introduced me to a new way of answering those irritating cold calls that always seem to arrive when you’re taking a pan off the stove. One of the student teams included a contestant who, I was informed, preferred not to be gendered. The producer took me to one side and explained that the correct salutation was not ‘Mr’ or ‘Miss’ or even ‘Miz’, but Mx — pronounced ‘Mix’.

Back to the call. It began as usual, with “Good morning, am I speaking to Mr Paxman?” followed by much implausible blather about “green energy” and solar panels, as the pan on the hob boiled dry. Previously I have got rid of calls like this by asking “before we go any further can I just ask what you’re wearing?”, which generally means in one bound you are free. If you have more time and the call is from ambulance-chasing lawyers offering wealth beyond the dreams of avarice should you have tripped over a paving stone, then it is always fun to say that you have indeed had such a disaster befall you, to let them rabbit on, and then to say: “But that’s fantastic. I didn’t know you could claim TWICE.”

I answered this particular call by saying that I preferred not to be enslaved by gender. That finished it.

According to the new film, Truth, about the 2004 CBS report which alleged that George W Bush finagled a post in the Texas Air National Guard to avoid serving in Vietnam, it is the producers who determine what happens on television.

Though it pains me to admit it, there is much in this analysis. Cate Blanchett delivers a scorching performance as the producer of a slipshod piece of journalism. But the most telling scene comes when the wife of a very ill source confronts the team and accuses them of not caring whether her husband lives or dies: all that matters to them is the story. Every thoughtful member of our trade has been troubled by some version of this question at least once.

Journalism seems to be rather fashionable among filmmakers at present, to judge by Truth and Spotlight, the best picture winner at the Oscars. Finding things out is what gets us all out of bed in the morning, and of course I believe it matters. But the big omission from both films (and most other cinema portrayals of the trade, with the honourable exception of The Front Page) is any sense of the exuberant humour of the business. US journalism takes itself tediously seriously. But my abiding impression of the company of journalists is that of irreverent — and often very ribald — laughter. Watching the march of folly does that to you.