Stop whingeing about Shakespeare in Love 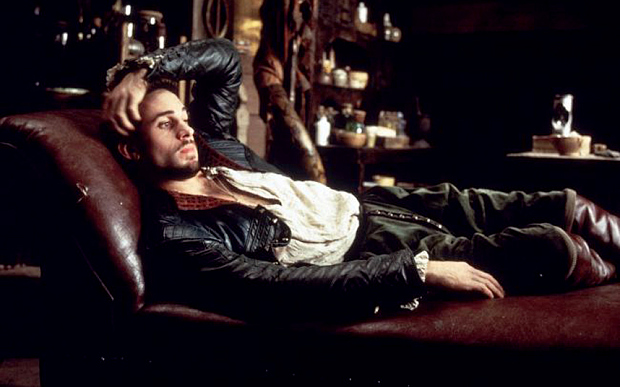 Any day now, this being Britain, someone will say that Shakespeare in Love should never have been made. They will thunder that it is full of elitist literary jokes, is historically inaccurate, and doesn't even conform to what we know of the life and work of William Shakespeare,

All of these things are true. But ignore the whingeing: any film that has had as smooth a launch as this one is bound to succumb to the traditional British sport of bashing the successful. It's a very rash thing to say before January is out, but I doubt we shall see a wittier movie this year [1999].

The film started out as an idea suggested to the producer by one of his children: why not make a movie about Shakespeare falling in love while writing his most romantic play, Romeo and Juliet? Four million dollars later, Universal realised it had a turkey on its hands. The script that had emerged from the Hollywood pre-production process was as funny as one of Peter Lilley's conference speeches. Universal must have thought Christmas had come early when Miramax bought it with a promise to pay off the debt. Miramax was clever enough to give the script to Britain's pre-eminent verbal juggler, Tom Stoppard. His script is one of the most cleverly witty in recent cinema.

Shakespeare is a jobbing hack with a bad case of writer's block. He also suffers from the kind of problem that would have Frank Dobson [then Health Secretary] rewriting the Viagra prescription guidelines in a flash.

He has promised to deliver a potboiler called Romeo and Ethel the Pirate's Daughter. The moneymen behind the Rose theatre company are banging on his door for the script. Inside, he can only practise his signature all day.

It doesn't take a great leap of imagination to discover how Shakespeare overcomes his problem. A stage-struck Viola de Lesseps arrives on the scene, desperate for a part in his new play. But because the Lord Chamberlain has banned women from appearing on stage, she must disguise herself as a boy You will begin to see the number of levels at which the plot is unfolding.

So far, so much like one of Stoppard's other skilfully ambiguous plays. Verbal pyrotechnics are what the man does. But Shakespeare in Love is different because, for the first time, this most cerebral of dramatists has produced a romantic comedy that is genuinely romantic. Even I, not normally one for film romance (even when it involves Gwyneth Paltrow), found it captivating.

But the joy of the film is the jokes. They work because the audience is in on them. There is the teenage boy whose main regret about Shakespeare's plays is that there isn't more blood in them. "What did you think of the play?" he is asked, after the first performance of Romeo and Juliet has moved even the flinty old Queen (another wonderful Judy Dench performance) to tears. "I liked it when she stabbed herself," he replies. The joke is that we've already learnt his name is John Webster and know he will grow up to produce a slew of blood-soaked Jacobean tragedies.

There is a running gag about Thames boatmen - the taxi-drivers of the day - who are forever being told "Follow that boat!", commenting "I 'ad that Christopher Marlowe in the back of me boat once" or trying to foist sheaves of paper upon the playwright with the words "I'm a bit of a writer meself".

When Tom Stoppard had performed his alchemy on the script, the Hollywood producer decided that it would have to become a British film, because, he told Newsweek: "It was an elevated text. American actors couldn't handle it."

But already, before the film has even opened in Britain, the attacks have begun. The film is objectionable because some of its jokes – that about Webster, for example – demand a little literary knowledge.

Ergo the film commits the sin of being "middle-class". Simultaneously, purists are beginning to moan that it's unacceptable because Shakespeare shouldn't be monkeyed around with.

Pedants object to the elegant device in the film whereby Shakespeare's thwarted love for the disguised Viola becomes the basis of Twelfth Night, on the ground that the two plays did not follow each other. The ludicrous objection has even been made that the film is unacceptable because we all know that Shakespeare didn't get his inspiration from a love affair but from Brooke's 1562 poem The Tragicall Historye of Romeus and Juliet. (When you look at how many of his plots he borrowed, he is, as the producer of Start the Week remarked, rather like Stoppard with Shakespeare in Love.)

There is a curiously British angst at work in all these criticisms. It is, apparently, acceptable to enjoy whimsy and humour when it is about something gritty – Brassed Off or The Full Monty – but not when some of the jokes demand a smidgeon of education. It is all right to applaud new presentations of Romeo and Juliet or Henry V on screen, so long as they stick to the text. But it is not admissible to bring a new audience to Shakespeare by imagining a biography for a person about whom we know precious little (beyond the fact that he left his second-best bed to his wife).

I find Stoppard's idea of Shakespeare as a jobbing playwright both engaging and plausible. I very much doubt that he would have regarded his words as holy writ. And I think he would have enjoyed the jokes.

Ignore the carping. Enjoy the film.