Why the Dickens do we despise Victorian art? 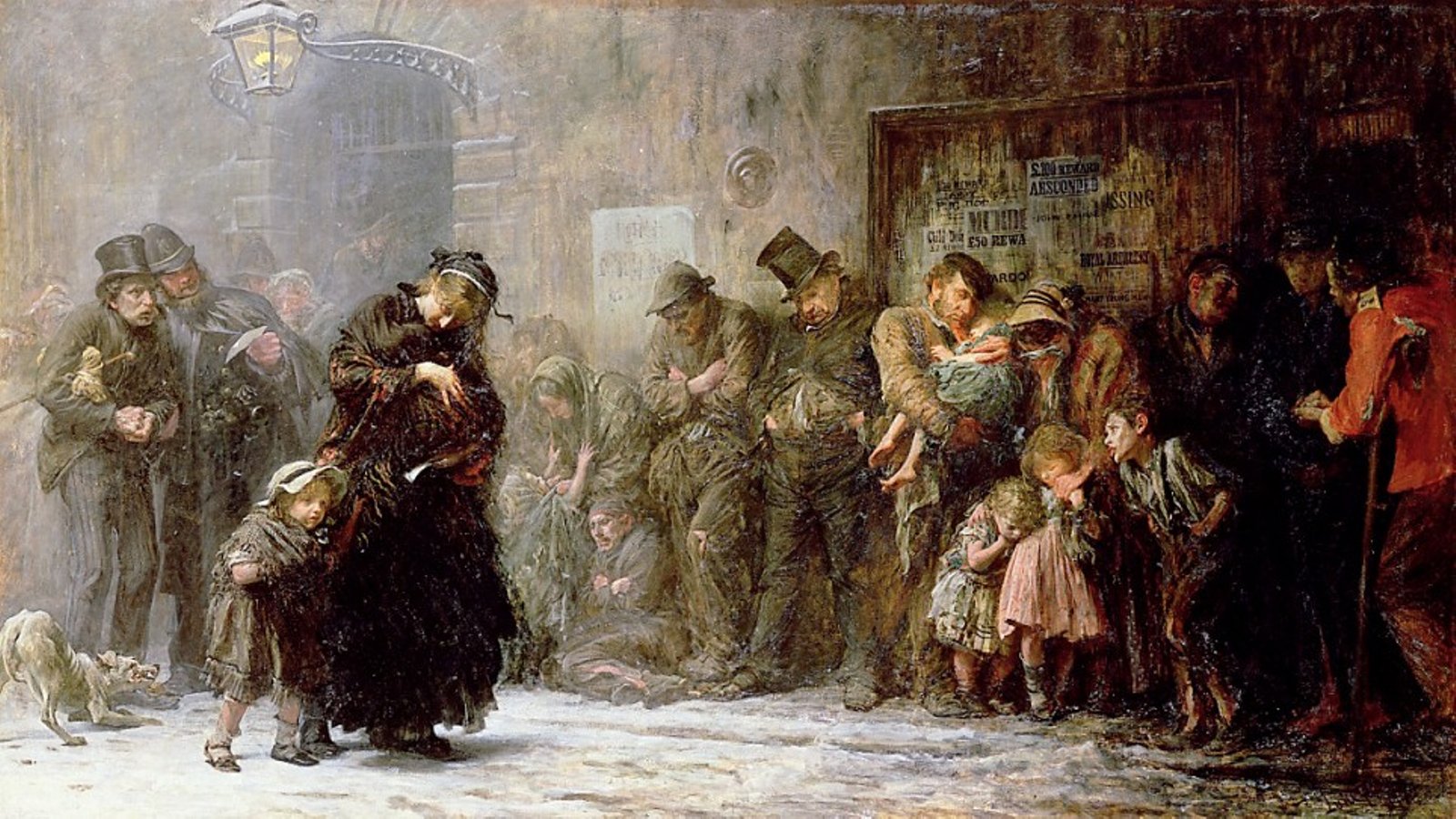 When was the last time you visited your local art gallery? Whenever I am in a strange town, I always go. And I head straight for the Victorian paintings. Now, who wants a figurative painting  -  and of people in funny clothes at that  -  when you can have a dismembered calf, an unmade bed or a pile of elephant dung? The answer is that, if you spare them the time, they will reward you as richly as a novel by Dickens, Hardy or one of the Bronte sisters. They are the great unappreciated witness to how life was when Britain rose to become the greatest power on earth. Modern indifference to them stands in remarkable contrast to their huge popularity at the time. For this was the cinema  -  or television  -  of the age.

We all know about the 1851 Great Exhibition, held in an enormous glass palace in Hyde Park (and going from drawing board to opening in nine months  -  compare that with the protracted labour that ended in the birth of Tony Blair's weird memorial, the Millennium Dome). The Great Exhibition was an advertisement for British genius, packed with locomotives, steam hammers and scientific instruments, although it's said Victoria herself was especially taken with a bed which tipped you into the bath in the morning and a set of corsets which 'opened instantaneously in the event of an emergency'. You can see why the crowds poured in.

But six years later, in Manchester, another glass-topped building drew in 1.3 million visitors in a mere 142 days. Most astonishing of all was what they had come to see: the event was an enormous art exhibition. The Manchester Art Treasures show remained for generations the biggest temporary art display ever mounted in Britain. Enlightened employers, like the Yorkshire mill-owner Titus Salt, hired special trains to bring their workers to see it. They arrived in their Sunday best, accompanied by the works band. The exhibition was a part of Manchester's coming-of-age. This sprawling, filthy, mess of a place had grown rich on the fruits of the cotton industry: they called it 'cottonopolis'.

As immigrants poured in, the population doubled in 30 years and great stinking slums spread out around the mills. A French visitor described it as 'a great jerry-built barrack, a workhouse for 400,000 people, a hard-labour penal establishment'. This was definitely not the sort of place you'd immediately expect to stage the world's biggest art exhibition. But it was part of a conviction among the city fathers that art could ennoble and civilise.

"The artists who fed the escapist appetite for naked flesh were matched by others who dealt in perhaps the weirdest genre of the lot, fairy paintings"

Soon the exhibition would be followed by a majestic mock-medieval town hall, intended to show the world that the most startling new city of the 19th century was as grand as any ancient town in Europe. The Manchester exhibition is typical of the Victorian can-do approach to life and the ruling-class belief in the 'improving' qualities of culture. But artists soon realised that there was a real hunger in this new urban mass for pictures which told them not merely about improving things, but about how they lived. Victorian Britain had been initially alarmed by the development of vast new cities. But the year after the Manchester exhibition, the Royal Academy in London showed William Powell Frith's painting Derby Day, a densely packed canvas depicting the carnival on the Epsom Downs that surrounded (and still surrounds) this great horse race. All different social classes rubbed up against each other at the Derby, and the picture was a sensation. Frith's painting, showing aristocrats, criminals, tumblers, a kept woman and dozens of others, was so popular that a stout rail and even stouter policeman had to be stationed in front, to keep back the crowd. One witness described them 'sniffing it like bloodhounds'. The crowd were thrilling to a recognition of themselves. Artists soon realised how their bread was buttered and, instead of recoiling from urban reality, began to celebrate it. Seasides, railway stations, street scenes all provided subjects for paintings.

One of my own favourites, George Elgar Hicks's The General Post Office: One Minute To 6, shows the desperate press to catch the post before the shutters come down at closing time. Porters carry rolled-up newspapers on their heads, a man wipes the sweat from his brow, relieved that he has beaten the deadline, a policeman arrests a low-browed pickpocket in the act of filching someone's purse. There is such an exuberance to it all. Not all urban art is quite so jolly, of course. Most cities had their dark side, of which the East End of London was the most notorious. Gustave Dore's forays into what a fellow investigator called 'a dark continent within easy walking distance of the General Post Office' crackle with dark and fantastic detail of thieves, prostitutes and opium dens.

The problem for the artists was obvious. The spectacular growth of Victorian Britain meant there was a new class of filthy-rich businessmen willing to spend money on paintings. Unlike the aristocracy, who might have acquired a taste for Dutch or Italian pictures while on a Grand Tour, they preferred home-grown artists: apart from anything else, it enabled them to avoid being ripped off with an 'Old Master' knocked up in someone's garden shed. But what newly-rich industrialist would want miserable pictures of the destitute hanging on his walls? By and large, they preferred something with a hint of sophistication, like Greek or Roman heroes, or gods and goddesses. Especially goddesses. It's when you look at something like a nude Aphrodite chained to a rock that you realise the breathtaking extent of Victorian hypocrisy: artists and their patrons could get away with almost anything as long as it was dignified by having a classical allusion.

Some paintings, like Lawrence Alma-Tadema's Tepidarium, showing a naked, sweaty, open-mouthed young woman lying on a bearskin, are little more than mild pornography.

Indeed, by the 1880s there was such an abundance of flesh on display that a letter appeared in The Times under the headline 'A woman's plea' begging for a halt to the torrent of paintings which 'revolts the sense of decency'. It was signed 'British matron' but, in fact, had been written by the treasurer of the Royal Academy, an innocent, deeply religious man named John Horsley, whose prudery soon earned him the nickname 'clothes-Horsley'. The artists who fed the escapist appetite for naked flesh were matched by others who dealt in perhaps the weirdest genre of the lot, fairy paintings. These precise, highly detailed canvases, packed with countless winged (and often semi-naked) children, leave me slightly cold. But there is no denying their popularity.

Even the greatest of Victorian engineers, Isambard Kingdom Brunel, had a taste for them. It is as if an age which was discovering so much about the origins of life and the limits of science needed reassurance that something remained unknowable. Artists who tackled subjects closer to home provide a striking insight into the social conventions of the time. When it came to the role of women, they could execute sermons in paint. Take William Holman Hunt's The Awakening Conscience, for example. A young woman has been sitting on her lover's lap. Her unpinned hair tumbling around her shoulders betrays their intimacy. There is a ring on just about every finger except her wedding finger, for she is a mistress. But something has triggered an anxiety attack: she has recognised the error of her ways. In case we're in any doubt, the artist labours the point, with a discarded glove on the floor (symbolising the casting off of sin), and a cat playing with a wounded bird.

The laws of the period afforded women few rights, and there are dozens of other pictures showing them their assigned role. The critical importance of sexual fidelity is hammered home in painting after painting. The fate of the fallen woman, unmarried mother or unfaithful wife was laid out in pictures like G.F. Watt's Found Drowned, showing the body of a young woman, washed up as if crucified under a bridge across the Thames. The title was taken from a column in the Times, which listed the corpses recovered from the river: in the space of two days in August 1847, the bodies of no fewer than five women were washed up. Watts's image is sympathetic, but the lesson painted in other pictures is that the woman's role is confined to that of faithful companion and dutiful mother, and woe betide those who stepped beyond the ordered confines of fidelity, obedience and cushion-plumping. Not that the artists themselves weren't capable of hypocrisy. Reproductions of William Frith's Many Happy Returns Of The Day, for example, hung upon countless suburban walls. The artist had painted this depiction of a child's birthday party from life  -  or one of his lives. The birthday girl was his daughter, and his wife and mother are the mother and grandmother depicted in the painting. Yet in the very year the painting was exhibited, Frith's mistress, whom he'd installed in a house less than a mile away from this cosy middle-class menage, gave birth to his first illegitimate child. There were to be a further six, bringing the old goat's total to 19 children by two women.

Artists such as Frith became celebrities in their own right, making small fortunes, building elaborate houses and occasionally letting the great unwashed through the doors of their studios to gawp at the place where the Great Men created. Once new techniques of engraving were developed, they became even richer, as the public clamoured for reproductions of works which reflected their world back to them.

Once the Victorian age had ended, the popularity of these artists plummeted. Their paintings have remained more or less unfashionable ever since. It's also true that many of the lesser works simply aren't very good.

But the best are rather remarkable pieces of reporting. Luke Fildes's Applicants For Admission To A Casual Ward shows a queue of people standing in the snow, waiting to be allowed into the overnight shelter for the homeless which was attached to almost every workhouse. It shows some of the casualties of that competitive capitalist instinct that made Victorian Britain great, but which Friedrich Engels described as 'a battle for life, for existence, for everything'.

Although Fildes claimed to have been inspired by what he saw as he walked the winter streets of London, the picture shows very identifiable 'types', each chosen to impart a particular message. Fildes employed down-andouts to pose for him  -  paying the barrel-shaped man in the middle of the picture, for example, in jugs of beer. Apart from the fat drunk, there is a mother and her children (evicted, a note told viewers, after her husband was imprisoned for beating her), an unemployed mechanic nursing his sick child, a disabled ex-soldier, all with their eyes cast down at the ground. The only one looking elsewhere is the man on the left of the picture, a respectable chap up from the country: he has given all his money to his criminal son. This use of painting as social or moral commentary is, it seems to me, very close indeed to what Charles Dickens was doing. (Indeed, Dickens was so impressed by Fildes's work that he asked him to provide the illustrations for his last, unfinished, novel, The Mystery Of Edwin Drood.) When you look at it  -  the newsreel celebration of humanity, the love stories, the morality tales, the fantastical science fiction  -  it really was the cinema of its day.