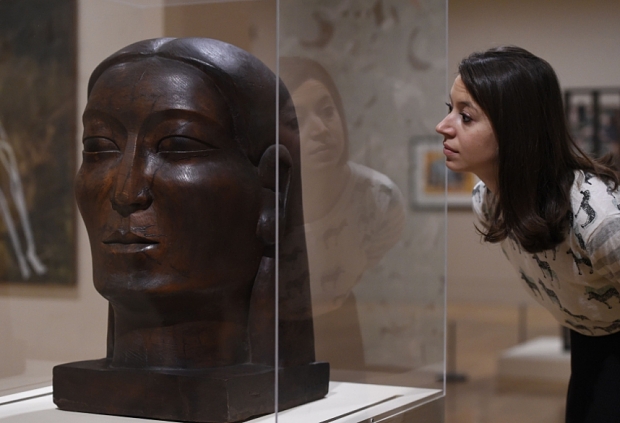 The Tate Gallery has chosen to open its latest exhibition, Artist and Empire: Facing Britain’s Past, as the country decides whether to join another war in a faraway country of which we know little. It’s a thought-provoking coincidence.

In just about every year of Queen Victoria’s reign, the British army was at war somewhere in the world and, apart from Antarctica, there is not a continent upon which it has not spilled blood.

There are even two Commonwealth War Graves Commission cemeteries in Syria. David Cameron is about to ask parliament to commit British forces to action there again, even if Bush and Blair’s last Middle East escapade was one of the things that created the Isil death cult in the first place.

But the people who murdered men, women and children in Paris are not amenable to reason, and there are times in every nation’s history when survival and self-respect allow no other response than to say “you have gone too far”. If there have been any voices saying “This is France’s problem, not ours”, I haven’t heard them: we all instinctively understand this is the most profound clash of all – reason and freedom against barbarism.

Yet none of our leaders is talking of “war”. All that is being advocated – just as soon as they can be sure there will be a majority of parliamentarians in favour – is a bombing attack on Syria. MPs are quite as good at formulating military strategy as any other gathering of Friday night saloon bar regulars.

No one doubts the destructive power of bombs and missiles – as the wreckage of Libya demonstrates. In 2011, this country spent hundreds of millions flying airstrikes against Colonel Gaddafi. Four years later, the place is in such chaos that it’s not safe for Britain even to operate an embassy there.

Not a single democracy on the planet was created by bombs. Sooner or later, brave souls will have to go to Syria and start talking to people.

It is true, of course, that occasionally military campaigns can go completely to plan. The Anglo-Zanzibar war of 1896 – generally known as the shortest war in history – lasted all of 38 minutes and took 500 enemy lives for one injured British petty officer. But even that little spat required the British to put marines ashore when the naval bombardment was over.

We are told that “local forces” in Syria will do the dirty work this time. But should we not ask ourselves what our moral outrage is worth if we are unwilling to risk the bones of a single British infantryman? Bombing may appear to be relatively risk-free, yet surely the overwhelming lesson of war is that what happens is not what was predicted?

As Artist and Empire reminds us, there was a time when the nation was sufficiently self-confident to say “hang the consequences”. Many of the paintings show British soldiers fighting their last stand, exhausted, outnumbered, at the edge of death. The standout picture is The Remnants of an Army, Elizabeth Butler’s startling image of Dr William Brydon arriving at the gates of Jellabad, apparently the sole survivor of a British force of 18,000. Other paintings depict imperial heroes, like general Wolfe at Quebec or the crazed General Gordon at Khartoum, falling as imperial martyrs.

But the greatest imperial tableaux – Thomas Jones Barker’s depiction of Queen Victoria presenting a bible to an African chief in The Secret of England’s Greatness, or Edward Armitage’s Retribution, where a hefty Britannia plunges a sword into the chest of a tiger, as punishment for the Indian “mutiny” of 1857 – show a confidence that our current leaders can only dream of.

We have been left the dressing-up box of empire. In the past week, several friends have wondered “Why can’t we just carve out a little bit of the Middle East where they can have their bit of earthly paradise and stone women to death and whatever else they want to do?” as if Gertrude Bell, who drew the borders of Iraq, was twiddling her thumbs in Mesopotamia, just awaiting the call. She’s not – and, anyway, the whole world already belongs to someone or other. And why should anyone have to live under an Islamic State regime?

The map-making comment reflects our confusion about our place in the world, and no amount of grandstanding by a Blair or Cameron can hide that. The politicians can draw on subliminal recollections of Britain’s record of international intervention, even if any fair-minded audit of empire would have to admit that noble motives, like the abolition of slavery are offset by baser ones of greed for land and gold.

From flag-planting to going home, it was a haphazard enterprise and we still haven’t really put it behind us. Much the weakest part of the Tate exhibition is the section in which contemporary artists try to grapple with the legacy of empire. Apart from the Singh Twins’ charming “EnTWINed”, which borrows from Victorian narrative painting and the Indian miniature tradition, most of this room is shouty and juvenile.

Parliament’s vote against bombing Syria in 2013 seemed a sign that the country might finally be shucking off its sense of itself as an international policeman (or, increasingly, as an American police dog).

The Victorian Establishment didn’t need to worry about popular support for military action and justified the despatch of punitive expeditions on the grounds they represented the greatest power on earth.

Their watchword was the Stuart motto, Nemo me impune lacessit – “No one messes me about and gets away with it”. Modern governments have to worry about voters.

On an actuarial basis, it is hard to see how bombing organisations which wish us dead increases the danger to Britain. But it’s salutary to remember that the last time David Cameron tried to persuade MPs to bomb Syria, the targets all belonged to Isil’s enemy, President Assad. As the sainted Donald Rumsfeld said: “Stuff happens.”

There does come a point when you have to say: “That’s not acceptable. And if you can’t see that, then I’m afraid we’re going to have to fight.” But let’s not pretend that we can do so without risk.