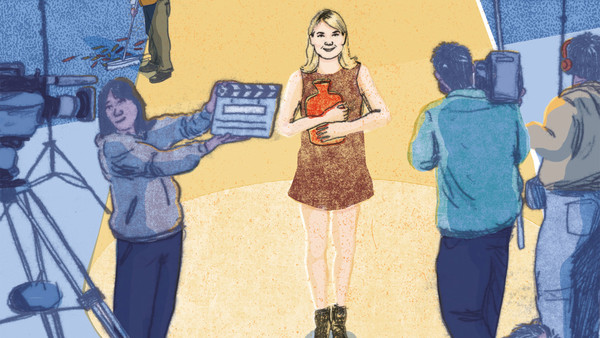 It’s 10 years since I made my debut on the big screen. It was a whole three sentences in total, my sole function being to enable Hugh Grant’s character to call me a “tosser” in the second Bridget Jones movie. Since then, the Hollywood casting directors have been inexplicably silent and I have been what table-waiting actors call “resting”. But good old Bridget came to the rescue the other day, when I was summoned to central London for another taxing day of performance on the forthcoming Bridget Jones’s Baby.

Any civilian who has had anything to do with filming has the same observation: how can a 15-second walk along the street require six hours of sitting around in the crypt of a church, accompanied only by endless cups of coffee and location-catering sausages (rather good, as it happens)?

I did have the company of Jeremy Clarkson, who was also there to walk along the street. We discussed doing our walks together, hand in hand. But the film crew beat us to it by filming us separately.

The tedium was slightly relieved by the presence of a couple of beautiful women, the models Erin O’Connor and Laura Bailey, who probably had rather grander roles. Certainly, they dealt with the ennui a great deal better than us men: I suppose that’s why whenever you see pretty girls advertising frocks they’re never smiling. It’s not that they’re sultry. Just bored.
We were all sworn to secrecy, so I cannot disclose any of the plot. But I can say that the scene was meant to be set in the spring, which meant Renée Zellweger, as Bridget, spent much of a wintry day clutching a green hot-water bottle to her tummy, and there was plenty of work for a couple of blokes with brushes, sweeping up leaves in the street. All told, the crew was about 150-strong, and everyone I spoke to was rather bullish about the state of the British film industry.

I am spending this weekend as I spent last, recording a series of University Challenge Christmas specials featuring alumni from a dozen or so seats of learning. I was pleased to meet this paper’s gardening correspondent, garden-gnome slayer and authority on Alexander the Great, Professor Robin Lane Fox, who was on one of the teams. The ancient historian arrived warning everyone that he was rather deaf and suffered from amnesia. “Good booking for a quiz show,” muttered one of the make-up ladies. Turned out he was bluffing (I think).

I have never come across anyone so in love with their buzzer: he sounded it every minute or so, whether it was necessary or not. At the end of the recording he asked if he could take it home with him.

Can any reader help with an etiquette problem? I was sitting on a crowded rush-hour Tube train the other day, when an exhausted-looking woman got on and stood swaying in front of me. I got up and asked if she’d like to sit down. She gave me a quick once-over, then said, “I think you need it more than I do.”

At what point does the pecking order change? One gets used to the children of slobby parents sprawling while octogenarians with swollen feet do their best not to keel over. But at what age should one stop offering to let people have one’s seat?

“What’s happened to this country?” was the thought that struck me in Southampton the other day. On the way to the airport in the early morning I passed the historic harbourmaster’s office — a splendid domed and pillared building on the waterfront testifying to the days when Britain was the world’s pre-eminent maritime nation — lit up by floodlights.

An enormous hoarding proclaimed it to be a “gentleman’s club”. This means it is neither a club nor for gentlemen but a place you wouldn’t particularly want your daughter working in.

Then, in the gents at Southampton airport, was something I’d never seen before. Anyone who cares about litter is aware of the awful mess caused by people spitting out their chewing gum on to the pavement, where it gets trodden on to shoe soles and paving stones, and then who knows where. It costs hundreds of millions each year to clear up. But, on the wall above the urinals, they had mounted a pink sphere with the message: “Recycle your chewing gum here”. It’s a clever product, invented a few years ago by a young designer while she was still at university, and the containers themselves are made out of recycled gum. Why aren’t they everywhere?

There is something impertinent about an FT diarist mentioning Samuel Pepys — the Lionel Messi of diarists. But I cannot finish without mentioning a terrific exhibition of his life and times at the National Maritime Museum in Greenwich. It’s the most wide-ranging and sophisticated thing of its kind that I’ve seen. The only problem is that the Docklands Light Railway to Greenwich doesn’t seem much quicker than a 17th-century horse and cart.