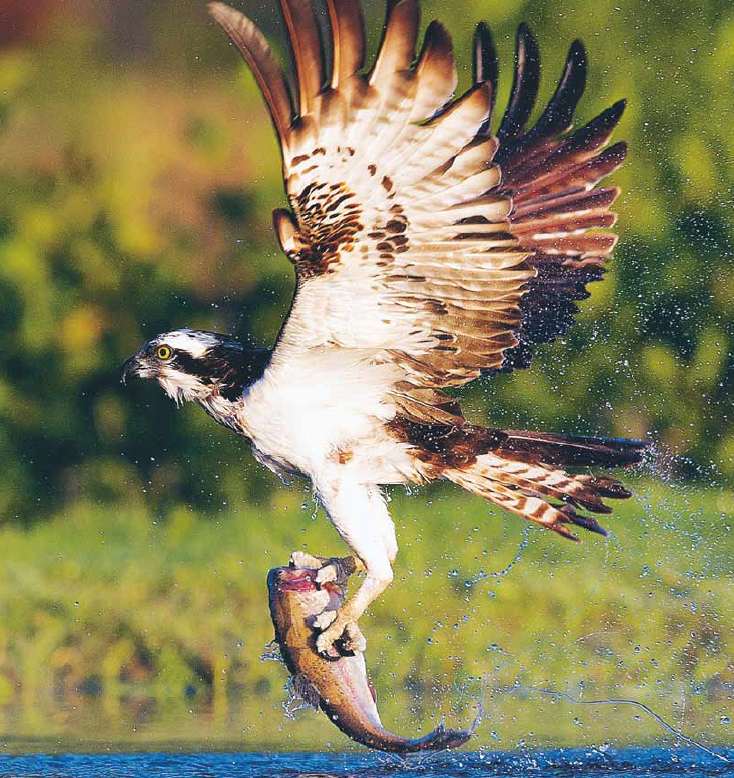 To see an osprey haul a fish out of a river or loch is one of the most thrilling sights in nature, while their flying feats from Britain to Africa each year are awe-inspiring, writes broadcaster and author Jeremy Paxman, who shares his love of the bird of prey and the work of the Tweed Valley Osprey Project.

I am lucky enough to fish for salmon on the river Tweed. But this is not yet another tale of woe about the sorry state of the king offish. This is about birds. And, bycomparison, it is exhilarating. If you have never seen an osprey it is hard to communicate quite what a thrill these birds can inspire. About the size of buzzard, these, surely, are the greatest fishers in these islands. Their astonishing eyes – yellow with black irises set above viciously curved beaks – give them preternatural skills of observation. Those of us who practice less effective ways of fishing sometimes see them soaring lazily upriver, then suddenly swooping down, lowering their legs like the undercarriage of some impossibly beautiful and deadly aircraft, to snatch fish from the water with their talons. Often, they disappear underwater completely, emerging with a heavy trout in their talons and labouring to get airborne. Once seen, never forgotten.

For much of the 20th century it was a sight unimaginable in Britain, for the birds had been driven to extinction by egg collectors. Then, quite out of the blue, a befuddled pair of ospreys from Scandinavia fetched up at Boat of Garten in Strathspey in 1954.

This was undoubtedly the biggest thing to happen in the village since the great Disruption of 1843, soon after which a carved five-foot high stone was erected to commemorate a supposed miraculous crossing of the Spey, of the kind effected by Moses in the Red Sea. Two years after that vigilantes from the Free Church of Scotland, outraged by the thought of a member of another denomination parting the waters, smashed up the stone and chucked it into the river.

Crazy place. After several years of persecution from humans driven by the moronic idea that an empty shell in some illegal collection represents an achievement, the Boat of Garten ospreys managed to rear chicks.There are now perhaps 200 pairs of ospreys in Britain, and I have seen them in several parts of the Highlands. By the 1990s ospreys were being seen in the Tweed valley as they passed through on their way to the Highlands. Then, one day in 1999, an osprey was spotted flying into a Tweedside forestry plantation carrying a fish – evidence that a pair had decided not just to rest, but to breed there.

This was remarkable, not only because ospreys are pretty rare, but also because the Tweed is about as far south as you can go in Scotland – indeed, for part of its length it is the border with England. With support from the authorities, forester Tony Lightley then built a number of nesting platforms at the tops of trees as part of a project to encourage the birds to take up residence. Astonishingly quickly, in the summer of 2002, one of them was occupied by a pair of ospreys, and for almost the next dozen years, they returned each year to raise their chicks, until the hen bird died. Ospreys tend to pair for life, and the loss of his mate – and subsequent death of the chicks from the cold – so disoriented him that he just sat on the platform staring into the distance and calling. He has failed to mate successfully with any female since. Naturalists are always, rightly, cautioning us against attributing human feelings, like abandonment, to animals.

So I will speak only of my own feelings when, one afternoon in the summer of 2016, the local Tweed Valley Osprey Project staff who protect the sites against egg-thieves took me to see another pair which had raised two chicks. It was one of the most remarkable feelings of my life.

The two chicks had almost fledged, but couldn’t yet fly and when Tony Lightley climbed the tree and lowered the two of them to the ground in a sack, excitement was intense.

I was slightly worried I’d be overcome with emotion. But the midges took care of that (We should be grateful to the midge population for restricting the tourism industry, but apart from that, what on earth are they for?) You don’t ask that question about ospreys: their beaks are designed for ripping up fish to eat. But the two chicks weren’t scary: they couldn’t fly, anyway. There was something rather adorable about them, as you can see in the photograph of PX1, the number of the identification ring I attached to his leg. Despite his beak and talons, he looked rather vulnerable. Who wouldn’t, having been lifted off the nest by a man in a red crash-helmet and then lowered to the ground in a sack?

For me, the eyes are the most remarkable feature, the pale feathers of his ruff setting off the merciless head, white belly and dark topside. As a matter of course, the two young birds were also fitted with satellite tracking devices. These provide an extraordinarily precise and detailed record of the migration undertaken by Scottish ospreys. Though the Tweed may mark the border between England and Scotland, national boundaries mean nothing to them.

Most migrating ospreys are drawn ineluctably to Africa, though they do not all take the same route south. Some cross the North Sea, some travel south over England and make for Brittany, some cross the Bay of Biscay. They then most head for one of the hottest, most inhospitable places on earth.

PX1 fledged on 13 July 2016. The two young birds spent their first few weeks on the Tweed, then, his brother, tagged PX2, left the nest on 29 August, flew to the English south coast and crossed the Channel to France, only for the poor thing to vanish somewhere between Paris and Lyon. There is no evidence to support the claim that he was shot by a Frenchman who mistook him for an ortolan, which is a tiny fraction of the size, and which they prefer anyway to trap and then drown in Armagnac. PX1 was more fortunate, leaving the nest at about 11am in the morning on 2 September, travelling southeast. Just before 2:30pm that afternoon, he was 2,000 feet above Hartlepool, roosting that night near Robin Hood’s Bay.

At 9am the next morning he set off again and a day later was in the Netherlands, then crossing into Belgium and Luxembourg, before travelling the length of France. By 8 September he was roosting in Spain, where he followed the Catalan coast southeast, until, on 12 September, he set out to cross the Mediterranean and roosted in Morocco. PX1 then travelled the length of Algeria (the biggest country in Africa) and across the Sahara, and rested for a few days when he reached water. His destination turned out to be 111 miles south of Bamako, the capital of Mali, and there in the desert, he roosted on 25 September. There I thought he had stayed, until an email came from the Tweed Valley Osprey Project.

In a feat which seems scarcely credible, last month, just after 10am in the morning of 28 March, PX1 left the area around the gold mines of Sanso, southwestern Mali and set off north.

After flying for 168 mis he roosted for the night on a shrub in an arid area of northern Mali, setting off at 6am to fly north again. Satellite bleeps show him soaring on thermals, before continuing to fly north, crossing into Mauritania at 2:40pm in the afternoon. Mauritania is mainly one vast expanse of desert, its society so backward that slavery is still common. The last transmission from PX1 came at 3:47pm the following day, when the temperature was 35 degrees Celsius. Since then, silence. No news is not necessarily bad news, since, as you might expect, Mali is rather short on mobile phone masts which are vital for triangulating position. The osprey guardians wait anxiously for news of the next virtual sighting.

On Easter Monday – a filthy day – I had an email from a friend who lives on the river. He’d been down to the river fishing that morning in sleet, snow and wind. He caught nothing. But, he said, “I saw a pair of ospreys for the first time this year. …They must be regretting leaving Africa”.

They were very high in the sky, so he guessed they were on their way to the Highlands. But could PX1 have been one of them? More importantly, why do they make this great odyssey from the desert to the Highlands and the dank banks of the Tweed? It may not be as long as the migration of the little Arctic tern (which travels from the Arctic to the Antarctic and back again in a single year). But it is an awe-inspiring journey. Scientists can theorise as much as they like. But humans have no control over where and when the ospreys come and go. I think the purpose of an osprey and its magical marathon is to show us how wonderful is the world we live in. I’m waiting for PX1 to finish his 5,000 mile journey and remind me of that. Postscript dated 10 April, 10:56am – “PX1 is in Spain, almost on the border to France. Potentially he could be in the UK by the weekend.”

Article originally from 'The Scotsman Magazine'