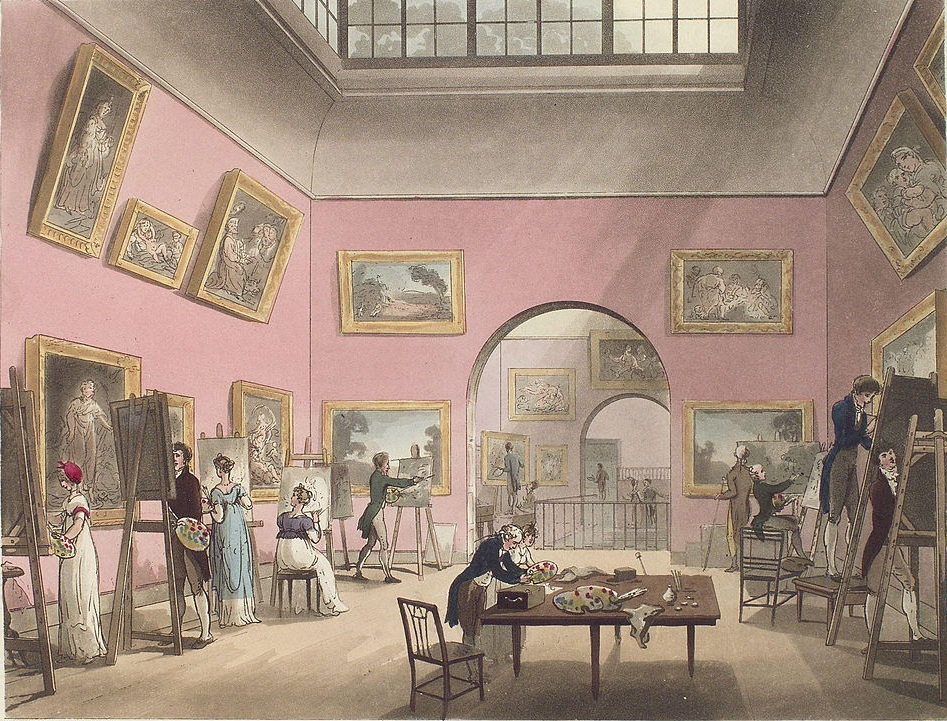 A sunny day. A steel band. A garland of flowers on the cheery statue of Sir Joshua Reynolds.

It is 'Varnishing Day’, when artists with works on show in the Royal Academy Summer Exhibition are invited for canapés, strawberries and a glass or two inside the Palladian mansion on Piccadilly. Before that, there is a procession down to St James’s church for a brief religious service. The band — now knocking out 'I love to Go a-Wandering’ — is followed by a man with a cross and various figures in clerical vestments and then a couple of hundred people dressed in everything from tweed jackets to dungarees.

From this sample, those lucky enough to have had the call to exhibit have an average age of about 45. At this stage, the only thing one can say with certainty is that whatever other talents they may have, they can’t sing.

When the organist strikes up a hymn inside the church, they produce only that embarrassed mumbling so characteristic of the Church of England.

The Royal Academy Summer Exhibition is one of the most venerable elements of The Season, less stuffy than Ascot, Henley, Cowes or Glyndebourne, but still, comfortably, the biggest show of its kind in the world: anyone can submit a work. It has run without a break every year since 1769.

Exhibitions come and exhibitions go. But the annual Royal Academy summer show is the one point in the artistic calendar that is more-or-less guaranteed to bring forth a collective sigh from the massed art critics of London.

They raise their eyebrows. They shrug their shoulders. They shudder in horror. The kinder ones dispense a few patronising bromides. The nimbler ones avoid it all together.

But a visit to the Summer Exhibition is almost enough to make you empathise with the poor dears. What is one to say? It is not that the exhibition has nothing of merit in it. It is that suffers from the problem that Winston Churchill is supposed to have noted when served an elaborate final course at dinner. He pushed the plate away, with the words 'This pudding has no theme.’

In the introduction to Gallery One we are told that 'surprise is the order of the day,’ which is another way of saying the same thing. By Gallery Five, the curator’s desperation reaches a shriek — 'this gallery deliberately defies any attempt to summarise its contents.’ There is just too much stuff, even for the Academy’s vast acreage of wall-space. The paintings are stacked one on top of the other, each given only an identifying number, so that if you want to discover its name — sometimes integral to appreciating the thing — you have to look it up in the list of works.

It’s a terribly Oscar-ish observation, to which William Powell Frith’s 1881 Private View at the Royal Academy — a room crammed with the Great and Good, to whom Wilde is dispensing his bons mots — is a partial rebuke.

But it’s hard to see how, with 10,000 works submitted, the exhibition could be anything other than crammed . In Wilde’s time, the summer exhibition was confined to painting and sculptures in marble and bronze.

This summer’s show includes photography, and — if you have the time to sit through one display after another - a room devoted to film and video. There is some thought-provoking stuff in each section, like Gillian Wearing’s troubling photograph, Lily Cole - a girl peering out from inside a damaged doll’s mask.

There is also some terrific sculpture. The first thing you see on approaching the galleries is Bryan Kneale’s enormous stainless-steel sculpture, Triton III : three curved shapes, two concave, one convex, which reflect the surrounding light and shapes. The central hall is dominated by a life-size silver statue of a man who has removed his own skin with scalpel and scissors. St Bartholomew, Exquisite Pain is, of course, by our old friend, Damien Hirst. It is worth noting a couple of other striking pieces, a monumental steel work by Anthony Caro built around a rusty anchor, and, my favourite, a delicate, wall-hung silver disc, White Light by Ann Christopher.

But each of these is by a well-known name, and, it is the openness of the entries which is supposed to be the Summer Exhibition’s glory.

Where are the creative talents yearning to break free from the shackles of the West Wittering Art Society annual show and to achieve the national acclaim they deserve?

The art critics’ disdain used to be focused upon the fact that so many of the nation’s unrecognised artists have a supposed fondness for twee landscapes and bowls of fruit. This year at least, these are in short supply. But one gets the slightly uncomfortable feeling that the exhibition’s claim to be the place where a talented unknown amateur may one day find themselves hanging next to a garlanded Academician isn’t quite what it seems. For, despite the diversity of styles and technique, there is a prevailing knowingness about so many of the works on show.

There are certainly some spectacular paintings, like Cy Twombly’s The Rose, a massive, melting triple flower image. But then Mr Twombly is also a well-established, wealthy artist (and honorary RA.) There are dozens of pleasing enough prints (many also by RAs.) But, for the rest , one gets a depressing sense that increasing numbers of artists — professional and amateur — know what’s expected of them and are more than happy to oblige.

There may be technical fluency. But there is much too little originality.

One does not get the impression from this selection of a seething mass of ideas screaming for recognition.

Are these proficient but often passionless pieces symptomatic of the state of art in Britain today? Without seeing the works that the selection committee rejected, one cannot say. But there was too little to get excited about on the walls.

This is not true of what, for me, was the highlight of the show. The architecture gallery, curated by Will Alsop, a room of black walls and shelves, overlooked by an exploding city, and lined with models of future buildings demonstrates the rude good health — even in these straightened times — of British building design. Piers Gough’s design for a Canada Water library, Spencer de Grey’s vision of the Monaco Yacht Club or Michael Hopkins Maharashtra Cricket Association building all testify to tremendous energy, excitement and sheer joie-de-vivre.

If only the whole show were as exuberant.

* The writer has requested that the fee for this article be given to the Koestler Trust for arts in prison.