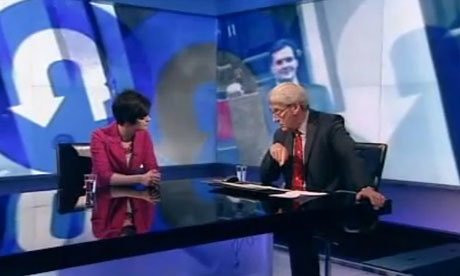 Jeremy Paxman: When were you told of this change of plan?

Chloe Smith: Well, as a minister in the Treasury and indeed dealing with fuel matters this has been under consideration for some time …

JP: When was the decision taken?

CS: As I say it's been under consideration for some time …

JP: When was the decision taken?

CS: … the chancellor and the prime minister …

CS: … take these decisions between them.

JP: So when were you told, then?

CS: I've been involved in this for some time and …

JP: But you didn't take the decision, obviously, you said the chancellor and the prime minister did, so when were you told?

CS: We had a, uh, collective discussion of that, er, er, in due course and although I can't, you know, give you the sort of full gory …

JP: Well did it happen today?

JP: Well, why isn't it appropriate? You're coming here to defend a change of policy and you can't even tell me when you were told what the change in policy was.

CS: Because, as a minister in the Treasury I've been involved in the discussions for some time, as I've said to you the chancellor and the prime minister take those decisions, I'm not going to be able to give you a running commentary on exactly who said …

JP: I'm not asking for a running commentary, I'm asking for a statement of facts about when you were told. You were told some time today, clearly. Was it before lunch or after lunch?

CS: I'm not going to give you a commentary of who says what and when. That's about how government policy is made behind the scenes.

CS: This has been under discussion for several weeks.

JP: Right, and at some point during those several weeks they communicated to you that there had been a decision to change the policy.

CS: Indeed, and today in front of parliament we, we revealed to parliament, as is right and proper by the way, to parliament, that we were planning to help households and businesses in this way.

JP: Is it hard for you to defend a policy you don't agree with?

CS: It's not that I'm afraid, Jeremy. Nice question. I do agree with it. I think it is very important to help households.

JP: Alright. In May you said it is not certain that cutting fuel duty would have a positive effect on families or businesses. So what's happened?

CS: I think the point to be made out of that, and out of what's then been said today is that it's important to do what you think you can to help households and businesses. In a world that we are facing, and I think your intro pulled some of these scenes out, in the world that we are facing, where things are very hard for households and businesses you have to do what you can, and you have to do that in good faith so that they can get the help that they need in these hard times.

JP: But you said that it wasn't certain "that cutting fuel duty would have a positive effect on families or businesses". That was on the 23rd of May, now what's happened between the 23rd of May and today which is, what, the 25th of June?

CS: Jeremy, I don't think many things are certain in this world. I think the point is, on that for example …

JP: There are a lot of uncertainties here, you …

CS: Families or businesses could even save the money they kept from less on fuel duty … there are lots of different ways that could pan out for families and businesses, but it's important the government does this …

JP: Why didn't the transport secretary know about it yesterday?

JP: Isn't the cost of petrol in people's cars a matter of legitimate interest to the transport secretary, who didn't know yesterday?

CS: No they actually refer to two slightly different things. The question being asked in May I believe was about a full cancellation and of course as you will be aware from today we have been talking of deferring the August rise to January.

JP: It's specifically about the August increase actually, the £1.5bn that you referred to and now you say is £550m. Can you tell us from which departments that gap is going to be made up?

CS: Well there are a number of those available. We know, for example, this year, that if you look at the public sector data released only today, we know that underspends are going, we know that the rate of spending is less than the OBR was forecast, those figures are there today.

CS: We know also that last year there was 4bn of those, so they are available...

JP: Which department is it going to come from?

CS: They fall across and in different ways and that figure will progress, if you like, through the course of the year …

CS: … we'll be giving you the full details in the autumn statement …

JP: Are you waiting to be told that as well?

JP: You know do you? You know which departments have underspent?

CS: It is not possible to give you a full breakdown at this point because the figure is evolving somewhat, as per the data today, the data is available monthly in that particular instance.

JP: We are clear that what you are looking for now is 500-odd million pounds, you say that various government departments are underspending, although you are unable to tell us which ones. Presumably you do know but are choosing not to tell us. Is that correct?

JP: Fine. You're choosing not to tell us which government departments have underspent.

CS: It's an aggregate figure, and I think that's what's important here. The figure says there is enough underspend there to fund a policy like this and what's really important is when we see that kind of funding available we want to spend it for the good of the households and businesses.

JP: And can you just confirm to us that the number one priority of the government is reducing the deficit.

JP: That's the number one priority?

CS: The facts of using underspends for this means that our plan is absolutely intact and that is rightly what we seek to use for the credibility of our fiscal plan.

JP: Is this some kind of joke? I mean how can you possibly have as a number one priority cutting the deficit when you choose to spend an underspend in funding a tax cut or failure to implement a tax rise that was scheduled?

CS: The plan overall has not changed, the plan overall remains those departmental budgets as they were laid out and those have not changed. We're looking to use the underspends, however, in a way that is really valued by households and businesses and think anyone listening tonight who drives a car does know that.

JP: We learned today that government borrowing increased by, was it, £3bn … in May? £3bn, no £3bn is about forecast, wasn't it?

CS: For reasons that are interesting in themselves.

JP: I'm just wondering why you didn't you, you know, use this money to do something like paying that down?

CS: Well, the figures on the other side of that public sector data release today are quite interesting in themselves, they do relate to rather one-off factors. Specifically in terms of when some payments were made between May and June. That is of interest perhaps in a different conversation but the fact is here that we are sticking to the overall plan and taking the opportunities we have to help households and businesses.

JP: Do you ever wake up in the morning and think, my God, what am I going to be told today?

CS: I wake up in the morning and know, actually, that some of my constituents will really value not having to pay that little bit more on fuel prices, come August, because the cost of everything is pretty tight at the moment and everybody does know that. I do think this move today is valuable. It's not just a Westminster Village story Jeremy, it's real money in real people's pockets.

JP: Oh, we all understand that.

JP: You ever think you are incompetent?

CS: I think it's valuable to help real people in this way and I do think that is valued by people who drive.