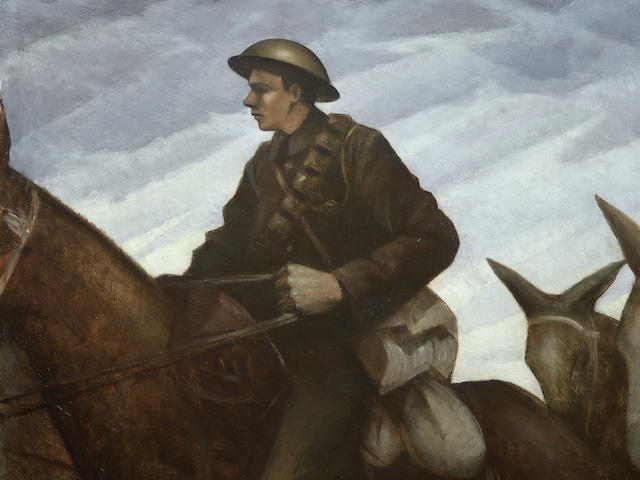 When Christopher Richard Wynne Nevinson died in October 1946, the New York Times reported the death of "a genius, playboy, and war hero". The Hampstead News contained its excitement with "Stricken artist dies in his native Hampstead." More than the difference between national temperaments, the two tributes – with the exception of "war hero" perhaps – are equally true. Nevinson had become a forgotten visionary. And a bit of an irritating prig.

Nevinson's greatest work was produced in the space of a few years during the First World War. By the time of the Armistice he seemed to have lost his artistic bearings. (According to The Times, "his success with his war illustrations was an accident of the subject".) By the time of his death his paintings were downright unfashionable. A sale at Bonhams in June, however, is likely to set a new world record for a painting by Nevinson. Mule Team is one of the very few paintings of the First World War by Nevinson to be offered at auction in recent years. Prints by the artist will also be on offer in a separate sale.

Nowadays, when people think of British First World War artists they generally conjure up Paul Nash, Percy Wyndham Lewis or even Stanley Spencer – yet the greatest of Nevinson's paintings are, to my mind, among the very best.

Flooded Trench on the Yser (1916) presented an entirely new, explosively fashioned landscape in Flanders, the rain slashing down in lacerating diagonals: you can smell and feel the desolation. Paths of Glory (1917), famously censored by the War Office for its unflinching depiction of two lifeless, faceless Tommies, revealed the human cost of war – no glory, no triumph.

Nevinson was 25 when war broke out. A prickly, rather chippy young man, he was a child of North-London comfort with a well-known war correspondent and his liberal wife as parents. He'd emerged from the banal brutality of his English public school – Uppingham – to study at the Slade School of Fine Art alongside Nash, Spencer and Ben Nicholson. There followed a period living and working with the community of Futurist artists in Montparnasse. The movement's obsession with speed and action, its smashing of belief in comfortable representation, was a perfect refuge for the young man who had spent much of his time at the Slade being scorned by his professor as unlikely ever to cut it as an artist.

Most of the Futurists were Italians who despised their country's association with the cultural achievements of its past. With the monomania of privileged crackpots, they eagerly anticipated the destructive potential of the outbreak of war. But Nevinson was unmoved by the tide of brass-band 'If I should die, think only this of me' patriotism which swept Britain. He instead joined the Friends' Ambulance Unit, a Quaker medical operation which devoted itself to caring for the wounded and dying in France.

It was a traumatic experience: "We could only help, and ignore shrieks, pus, gangrene, and the disemboweled."

The putrefaction was a wholesale rebuttal to the Futurists' childish enthusiasm for war and destruction. Nevinson endured the effects of technology on the human body for two and a half months, before returning to London on sick leave.

The Field Hospital's loss was art's gain, for the Futurist style which Nevinson had embraced before mass mobilization was the perfect vehicle for expressing the horror of the first fully mechanized war. This appalling conflict can be summarized as a reckoning between human ingenuity and political ambition; one endless attempt through the development of new weapons – tanks, artillery, gas, flame-throwers, trench mortars, air power, submarines – to extinguish the enemy. The style of Nevinson's paintings – the somber colors, the angular shapes resembling the sharp-edged shrapnel which flew everywhere – was the perfect way to see its dehumanizing effects. "A man is all the sadder for seeing war," Nevinson later recalled, "but I grew better, and painted."

Nevinson subsequently joined the Royal Army Medical Corps, working as an orderly for the 3rd London General Hospital in South London (where, in 1916, the sculptor Francis Derwent Wood would pioneer the Masks for Facial Disfigurement Department). These experiences – the unrelenting strain behind the front line, the reality of human fragility – produced what is perhaps the finest painting of the war, La Mitrailleuse.

La Mitrailleuse shows three French soldiers firing a machine gun (a fourth lies dead in the trench at their feet). The picture is all angles, with any trace of humanity removed from the soldiers who are merely part of the machine spewing death at the enemy. An astonished Walter Sickert called it "the most authoritative and concentrated utterance on war in the history of painting", and the crowd of spectators, including Winston Churchill, Arthur Balfour, Ramsay MacDonald, Joseph Conrad, as well as numerous generals, was so dense that guards had to be stationed beside the painting to protect it when it went on display in London. It was – and remains (it was bought for the nation) – an astonishing picture. As John Rothenstein put it in Modern English Painters, Nevinson had discovered a way to render in art "subject matter that everyone was under an almost irresistible compulsion to expel from their memory". By 1917 Nevinson had been engaged as an official war artist and was back at the Front.

The public saw the brutal reality of life on the battlefield as never before. At the outbreak of the First World War photographic equipment, though cumbersome, was portable enough to be taken to the Front.

There was even a documentary depiction of the battle of the Somme shown in cinemas within six weeks of the start of the attack in 1916. But, as J.E. Crawford Flitch remarked in 1918, "The camera observes everything but experiences nothing . . . We ask for the truth, the whole truth, and it gives us nothing but the facts." Be it Goya or Picasso, artists have tried to do more, to depict something of the spirit of war.

Yet there was something so numbing about the massive number of human casualties in the First World War that their scale became almost impossible to communicate. "The war has used up words," said Henry James in 1915. Within three years, the British government had commissioned 130 war artists. One of them, Paul Nash, described himself as "a messenger who will bring back word from the men who are fighting to those who want the war to go on forever. Feeble, inarticulate will be my message, but it will have a bitter truth, and may it burn their lousy souls."

The suffering of animals was a perfect vehicle for this message. As one Royal Artillery signaller put it: "We knew what we were there for; them poor devils didn't, did they?" But animals were critical to the war effort: in August 1914, the British army had only 80 motor vehicles, yet it had 25,000 serving mules and horses. The army commandeered many more motorized vehicles, of course. By the end of the war, it had deployed almost 896,000 horses, mules, donkeys, camels, reindeer, bullocks and dogs in the war effort. As vulnerable as humans to artillery shells, bullets and gas, they died in great numbers.

The horse, famously, is the vehicle of kings, gods and generals: Alexander and Bucephalus, Napoleon and Marengo, Wellington and Copenhagen. The mule, by contrast, is stubborn, bad-tempered and sullenly unglamorous.

Most are incapable of reproduction. Yet they often proved more capable of surviving the dreadful conditions of the Western Front than either horse or machine, delivering, for instance, three quarters of the ammunition at Passchendaele, struggling through shell holes filled with mud and sewage to drag gun-carriages forward.

Bandaged with the men's own field dressings, their hides scarred by shrapnel, a deep affection developed between soldiers and their beasts of burden. The sight of an animal with its back broken or entrails torn out by a shell reduced many to tears. A lieutenant in the Royal Field Artillery recalled in a letter home how a shell dropped in the middle of a mule team. The men survived, but two of the mules had to be shot because of the severity of their wounds. The lieutenant described how the mule driver kept sobbing "He was my donkey, my donkey." That kind of suffering left some men with nothing but loathing for the 'civilized' society they believed they represented. This bond between man and beast is brilliantly captured in the memorial to the 58th (London) Division at Chipilly, near the Somme, showing a man cradling a stricken draught horse.

Mule Team, the painting being sold by Bonhams, is small – two by two-and-a-half feet. It shows a single Tommy in tin helmet, greatcoat and bandolier, astride one of the hundreds of thousands of beasts of burden which kept the British Expeditionary Force supplied with food, guns and explosives. In its quietness it is, somehow, a bleaker vision of war. As man and mule slog forward into the gray dawn, in color, texture and feel, they merge together. The Tommy's fist is clenched and enlarged. The mood is stoical and unheroic. Mulish, almost.

Jeremy Paxman is a BBC broadcaster and author. His most recent book is Empire: What Ruling the World Did to the British.