Expansion of the university sector has destroyed its status 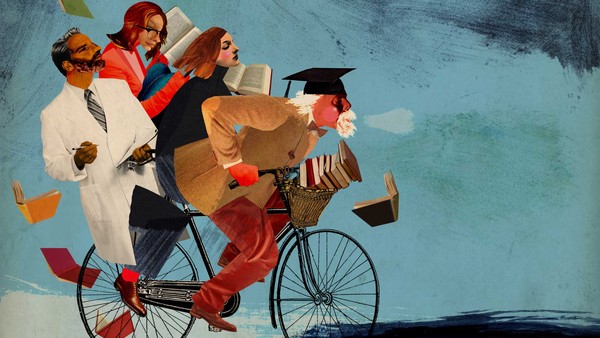 Once upon a time, the clever young person who worked hard, got a good degree and was rewarded with a job at a decent university felt they had achieved a certain status in society. They might not be especially well-paid, but life among the sherry and corduroy jackets was congenial, and worthy of respect.

Fewer seem to feel like that any more. Almost every aspect of what was once thoughtlessly called The Establishment has suffered a calamitous loss of esteem. But the changing status of academia is a real puzzle. “The old autonomous institution at the pinnacle of the state is no more. The Republic of Scholars is just a rhetorical phrase,” says the head of one Oxbridge college, explaining part of their unhappiness.

The academics’ cause is not an easy one to champion. Moaning lecturers are never going to garner the public sympathy that distressed nurses can count on, and no government is going to quake at the prospect of 1,000 elbow-patched arms bearing placards saying “More Respect, We Implore You”. But fed up many tutors certainly seem.

Soon after the second world war, TH White produced a philippic against what Britain had become. “Well, we have lived to see the end of civilisation in England,” his squib began. As a student at Cambridge in the 1920s, the master of his college had been “a fabulous being” who lived in beautiful surroundings, drank plenty of vintage port and wrote occasional obscure treatises only “if the spirit moved him”. He was attended by maids, footmen and a butler. Now, when White returned to Cambridge, he watched as the master did the washing-up after lunch.

God knows what he would have made of academia now. Poverty long ago drove the professors out of the houses built for them in the Victorian suburbs of Cambridge and Oxford. North Oxford is colonised by bankers: there is a house for rent there at £300,000 a year.

No regius professor went into his or her field to get rich. But then neither did most of the middle class.

The average salary of a majority of academic staff at universities is somewhere between £35,000 and £45,000.

Yet the career still seems to remain attractive. A single junior research fellowship at Selwyn College, Cambridge recently attracted 600 applicants. Why, then, should anyone worry about improving the levels of pay? And affluent universities wishing to attract globally renowned professors seem to be able to find the money. For now, at least.

The real problem comes elsewhere in the system. In the older institutions academics may worry about research funding (what happens to me when this contract is finished?). In the younger universities, the concern is about teaching and tenure (after all that study, what am I doing on a zero-hours contract?).

The differing concerns reflect a fact of life which many shudder to acknowledge: stratification. Once the government took the decision that half of school leavers should have a university education this was inevitable, since the number of exceptionally gifted school leavers did not also increase.

There are now 160 or so higher education institutions in the UK, and nearly 195,000 men and women employed teaching and researching in them, which has in turn meant a wholesale growth in the number of managers. They arrive armed with performance-measuring theories, but there is no easy way of assessing the value of huge areas of academic endeavour and large numbers of dons cordially loathe them. It is not necessarily the managers’ fault: a previous Labour education secretary, Charles Clarke, once came out with the yahoo-ish observation that he couldn’t understand why the state should support medieval historians. I have known him for 40 years and he is generally a slightly more thoughtful person. It must have been a cry for help.

What the disgruntled academics seem to be unhappy about is that things ain’t what they used to be.

At the top end they wonder about marginalisation from political debate. “Who is the CEM Joad of our time?” asks one, who can surely never have heard the fare-dodging philosopher on the popular wartime BBC radio programme The Brains Trust. No callow media boss would commission its like nowadays; instead there are dozens of mini-Joads: you can hardly switch on the television or radio without hearing the historian David Starkey. And it is still to senior common rooms that governments turn when they need someone to unravel a problem which cannot be fixed by easy sloganising.

Those lower down the food chain (they would hate the term) work in an environment which Joad would refuse to recognise as a university at all. Casualisation is an unpleasant characteristic of many 21st-century workplaces, but is especially hard in a culture in which tenure could once have been expected.

Talk of a republic of scholars rings particularly hollow to academics who see that the effect of the introduction of student fees and loans has been to turn pupils into paymasters. Disgruntled students, however, have a point. Why should young people saddle themselves with enormous debts in exchange for what can be indifferent teaching and non-existent pastoral care?

No one wants to go on the record and admit that one of the consequences of fees is the sort of grade inflation that has devalued so much of secondary education. In a survey last month, almost half of those questioned claimed to have felt pressure to bump up students’ grades or to prevent them failing.

I have to say that, for all the warnings about how fees would ruin higher education, on University Challenge we have seen no drop in quality: the best students are as bright as ever they were and the questions much more difficult. Students competing on a television quiz are not a representative cross-section, admittedly, and like many of us fortunate enough to have had a tertiary education, I believe that learning is a good thing in itself. It is just a pity that policy makers and professionals did not think through the implications of wholesale expansion of opportunity before it happened. What is a university education for? They left that tricky question to the poor old dons.