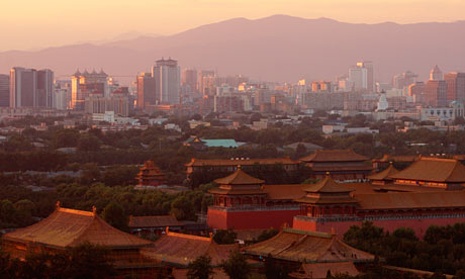 There was a minor riot in Beijing last week. The Apple store was attacked. Its offence? Not being willing to sell sufficient numbers of the iPhone 4S. Buyers had queued all night and things turned ugly when it became clear that many of those in line had not the faintest idea what an iPhone was. They belonged to teams hired by middlemen who knew that every handset bought was re saleable for an additional £100. The teams of tech-unsavvy people were identifiable to each other by homemade armbands, and when the store staff realised what was happening, they suspended sales. That was when the eggs started flying. In London they riot to steal things. In Beijing, they riot because they cannot buy them.

China proclaims itself a secular country. But that is not what it looks like. For a first-time visitor to China, the most astonishing aspect of the country is the worship of wealth.

The mayor of London may like to be seen riding around on a bicycle. That is not the style of the mayor of Beijing.

Even China Daily, a sort of hymn-sheet to the Communist party, reads like the FT much of the time. It reported this month that there were more Rolls-Royces bought in China last year than anywhere else on earth, that Audi now sells more of its brand there than in Germany, and that the company confidently expects to exceed its target of 1m sales between 2011 and 2013, "as long as we can grow annually at 8%", as a senior executive blithely asserted. The target was set less than a year and a half ago.

It is all surface froth, of course: there will still be 1,299,000,000 Chinese who do not buy an Audi. But it is the flaunting of wealth that is so shocking, because the entire economy floats on a sea of migrant workers willing to go anywhere for a day's pay. You can hear them hammering on the construction sites and see them clambering across the half-built highway towers from dawn until long after dusk. Victorian Britain was perhaps similar, and the smog of Charles Dickens's London finds its counterpart in the murk that envelopes Beijing on windless days and tears at your throat like sandpaper. Beijing – once, apparently, a charming ancient city – has been torn down and replaced with a traffic-jammed assortment of functional concrete blocks, interspersed with the occasional stunning pieces of modern architecture.

The ageing men in the politburo must look out on it all from the backs of their limousines and smile. Chairman Mao's Cultural Revolution sent intellectuals to live as peasants.

Embracing capitalism has created a class of urban plutocrats. China is the great emerging force in the world, and the feeling of apprehension everywhere else must be good.

It is customary to attribute China's new wealth solely to its abundance of cheap labour. But it would have been impossible if the country's entrepreneurs had not possessed the sort of work ethic that drove the captains of Victorian industry. People seriously want to get rich. It may not be attractive. But it is more than enough to see off soft, western welfare states that have sold their future for the sake of cheaper televisions and trainers.

Dozy western governments seem to believe that it does not matter much, because somehow their comfortable democracies will coast along on the fruits of intellectual invention. These governments bask in the belief that we can outsource metal-bashing and shirt-stitching because the brains that devise the products nestle inside western heads.

How much longer can this complacent illusion last? In the 1960s there was a common belief among the English middle class that things made in Japan were "Japanese junk".

The Sony Walkman and infinitely more reliable televisions than any manufactured in the country that invented the damn things soon ended that complacency. The main television station in Chengdu, capital of Sichuan province, has a spanking new news studio infinitely superior to any the BBC can boast. Chinese airlines (many of which know a great deal more about service than their western counterparts) fly Airbus and Boeing but soon the country will be making its own passenger aircraft. What reason is there to assume that banking or any of the creative industries are beyond their ability? Computer graphics for the London Olympics have been designed and made in Beijing.

Predicting the future is a job for clairvoyants, not journalists. But I can't see any easy way for the trade imbalance to be equalised. Rather the reverse.

There is, though, one worry the so-called communists in the Chinese government might want to trouble themselves with. One night, while eating in a smart Beijing restaurant, I teased my host by asking whether the other diners were party officials. His instant – and serious – reply caught me out. "Oh no," he said, "they always eat in the private rooms at places like this."

All the best restaurants have these private rooms, so the rich and powerful do not have their meal spoiled by the offensive sight of their fellow citizens. Many of these private rooms serve delicacies the Chinese people can only dream of. Come to think of it, they probably do dream of them. I'm talking abalone, sea slug and pufferfish. I don't know enough about China to assert that this sort of behaviour cannot last. But I do know that it would not be tolerated in western Europe: revolutions have been sparked by less.

The majority of the Chinese people do not yet seem to even have their noses pressed to the windows. They are too busy hoping to get rich, or just trying to make ends meet.

But the one-child policy is openly flouted by the rich, who simply pay the fine or arrange for the birth to take place in Hong Kong. If a migrant worker's child falls ill and the parents cannot afford health insurance, they will not get hospital care. The overseas bank accounts of the mega-rich are an open secret. Stories of corruption, even of car accidents in which young people run someone over and expect to get away with it because their parents are senior in the party, are legion.

Not one young person talked, even in their cups, of revolution. There are too many people doing too well for such thoughts. But it does not take a clairvoyant to ask how long it can last.