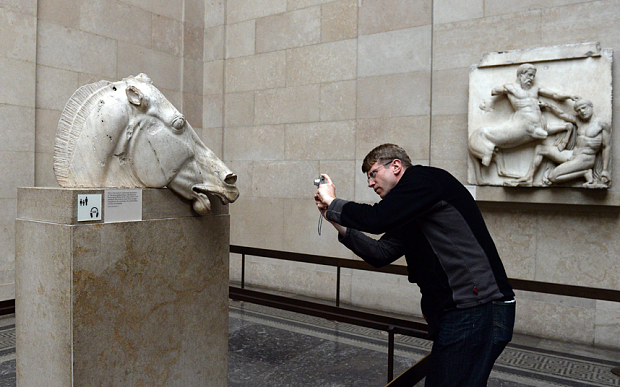 Mrs George Clooney has spoken. She expects the world to listen.

It is, she claims, “an injustice” that the British Museum has not sent the Elgin Marbles back to Greece. She is the latest in a long line of glamorous dressers – Melina Mercouri, Nana Mouskouri, Demis Roussos – to demand Britain surrender objects it owns.

Half the population of the world considers Mrs Clooney one of the luckiest women alive. She may not currently be in any danger of being whisked from dock-brief obscurity to the Supreme Court. But her bosses were canny enough to put up their most junior advocate as their spokesman, because they understood that she would garner a lot more column inches than they would. “Lawyer puts client’s case” is even less of a story than “cameramen film glamorous woman”.

So, earlier this month, while the snappers clicked, the Greek authorities took Mrs Clooney on a guided tour of the splendid new museum on which their country has lavished millions it does not have. It is, apparently, a terrific museum. Uniquely among museums, it is intended not just to show off what it possesses, but what it doesn’t possess. The most significant things that it does not possess are the Elgin Marbles – the beautiful classical statues by Phidias and his pupils that once adorned the Parthenon, were removed by an early 19th century British diplomat, and are now displayed in the British Museum.

Naturally – for she is being paid by the Greeks, after all – she told the press that they had, er, “just cause” for demanding that the statuary not in the museum should be returned to Athens.

It’s an attractive argument. Arrogant British nob plunders works of art, “vandalising” the ruins of one of the most beautiful buildings in the world in the process, ships them abroad and then flogs them to the British Museum. It’s enough to make any patriot’s blood boil. As for the British position that Thomas Bruce, Lord Elgin, had bought the statues quite legally (they ended up in the British Museum when he sold them to try to avoid bankruptcy) – well, at the time, Greece was under Turkish occupation: the rulers of the day may have agreed the deal, but the Greek people didn’t.

But what would have happened to these sculptures had they stayed in Athens? After all, at the time Lord Elgin helped himself the Parthenon was being used as a fortress. Mary Beard’s excellent short history of the building tells us that for most of the 18th century, Athenians were in the habit of grinding down marble statues to produce lime and used parts of these great classical buildings as rubble for their foundations. Had the ghastly Lord Elgin not plundered his works of arts, they could have ended up in the footings of some kebab stand.

The modern argument is really political – a poor, put-upon Mediterranean culture is demanding restitution from a fading imperial power.

Though modern, independent Greece is a world away from ancient Athens, the country was once the home of Socrates, Plato, and other founders of western thought. Indeed, many a bewildered survivor of a chaotic, Greek-organised EU conference will tell you that a tenuous connection to this resonant philosophical culture must be the only reason the country ever got into the organisation.

We are told that the Parthenon is a celebration of democracy. Actually it was built as a temple to Athena and everyone conveniently forgets that the construction was only made possible by the wealth of the ancient Athenian empire, much of which was based on protection money.

In the following centuries it was used as both church and mosque and, in 1687, was serving as a Turkish gunpowder store when incoming Venetian cannon fire blew much of the place to pieces.

The political passions attached to the Parthenon are really the work not of Greeks but of Germans.

On emerging from the Turkish yoke in 1833, Greece lighted upon the 17-year old son of King Ludwig of Bavaria as suitable human expression of its new-found independence. As King Otto, he and his German advisors tirelessly promoted the buildings on the Acropolis as the supreme expression of the Hellenic state. In scenes of mummery worthy of the producers of Strictly, Otto’s men annointed the Parthenon as the supreme emblem of their new country.

Who is to decide between this cause and the high-handedness of some clown who happened to have an ancestor who was once congenial to a British monarch? Earlier this year, one of Mrs Clooney’s allies – an American academic – claimed that “the Elgin Marbles, like fox-hunting, represent an overbearing past,” that Britain is growing out of. Perhaps so, but who is to say what might be the view when another 200 years have passed?

Surely, one hears Mrs Clooney argue, it is incontestable that it is nobler to reunite the broken creations of antiquity? Yet that is not what the Greeks are demanding. They call instead for the sculptures to be sent to Athens not to be restored to their place on the Acropolis – that would indeed be reunification – but to be displayed in a museum there rather than in London.

It’s a point of view. Maybe the Benin Bronzes really would perform a greater missionary function if they were on show in Nigeria than in London, Berlin, New York and elsewhere. After all, these Western exhibitions predate air travel.

But if we were to take the restitution argument at face value, the Venus de Milo – also removed from Greece during the Ottoman empire – would certainly have to leave the Louvre. The V&A would be packing up Tipu’s Tiger for shipment to Delhi. The magnificent Assyrian galleries at the British Museum would be on their way to Baghdad. And what on earth should happen to the great altar removed from the temple at Pergamon to Berlin? Pergamon is in Turkey, but was once part of imperial Greece, imperial Rome, imperial Persia and imperial Byzantium.

An adult understanding of history recognises that things always change and that all actions are the product of their time. Actually, I think Mrs Clooney’s suggestion of some sort of agreed swap, in which the British Museum lends the Elgin Marbles to Greece and Athens lends some of its classical treasures to London, is rather elegant. It is surely preferable to the absurd international Jarndyce vs Jarndyce, which is the alternative. Negotiations on which works of art were of comparable significance would anyway provide her firm with years of employment.

Of course, it wouldn’t satisfy those who argue that no artefact should ever leave the land of its birth. But then, by that formulation, we’d be digging George Clooney out of his new home in the Thames Valley and sending him back to Kentucky.