Was Napoleon a midget? 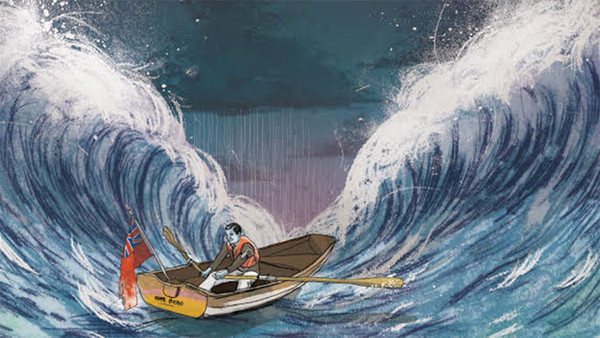 Last Friday I had the pleasure of dinner with the Cambridge University Royal Naval Unit. It is not one of the university’s better-known organisations – indeed, it has only existed for 20 years. But it is full to capacity with young men and women – either midshipmen or officer cadets – and a very jolly evening finished with the singing of sea shanties, beginning with “Heart of Oak” and ending in a galloping “What Shall We Do With a Drunken Sailor?”

Not so long ago, most people would have been familiar with both these songs. No more.

I suspect many of us would be hard put to say with great confidence precisely what the Royal Navy is for. A Royal Fleet Auxiliary has been sent to the coast of west Africa to help combat the Ebola virus emergency but who can imagine Britain fighting another naval war on her own.

The navy seems to have been in decline since before the Battle of Jutland. And the abject spectacle of a Royal Navy patrol surrendering to Iranian Revolutionary Guards seven years ago, then selling their stories to the newspapers (including the revelation that one of the Jolly Jack Tars had burst into tears when the men with beards took away his iPod and compared him with Mr Bean) is too fresh in all our minds.

The decision to allow the 15 sailors and marines to sell their stories was sadly symptomatic of a failure of leadership at the highest levels. One of the great unmarked characteristics of 21st-century Britain is the way that the country has ceased to have a maritime identity. Forget England’s “wooden walls”: England will soon stop building warships.

It’s the consequence of Britain’s post-imperial economic feebleness, membership of alliances and international organisations, to say nothing of little things like the invention of air travel and the digging of the Channel tunnel. No doubt the First Sea Lord is a splendid old sea dog. But who even knows his name? (I’ve just looked it up – it’s a chap called Sir George Zambellas.)

I’d been invited to the Cambridge dinner by Ralph Morley, captain of the winning team on this year’s series of University Challenge, from Trinity College. After their victory, Ralph sent me a thank-you note for the enjoyment he said they’d all had. It was written in classical Greek.

Like previous prodigies, Ralph has had to put up with a few nasty chatroom comments, in his case mainly for committing the sins of having been to Eton (he was on a full, means-tested scholarship) and reminding people of Sheldon in The Big Bang Theory. Neither of these crimes seems to me a hanging offence, and the fact that the comments were made at all reveals something rather depressing about the aggressive stupidity that still lurks in corners of Britain. Surely, we should be thrilled that some young people are amazingly clever, and care about getting things right?

The fact that he’s now planning to become a lawyer is much more troubling.

Back to the great “was Napoleon a midget?” controversy. I feel slightly guilty, since it was me who chaired the Intelligence Squared debate on whether Bonaparte deserved to have the words “the Great” attached to his name. The Napoleonic scholar Adam Zamoyski gave Andrew Roberts a good run for his money, pointing out that a man who managed to be turned down by a street prostitute can hardly claim to be a titan.

Yet, despite the fact that we can clearly discern Napoleon’s hand behind much that has gone wrong in European history, I am sorry to report that a very clear majority at the debate thought the strutting Corsican merited the moniker “Great”.

Personally, I think the safest thing to do with anyone who believes that history should record them as “the Great” is to send them off to perform at the end of Clacton pier all their lives. Happy the land that has no need of heroes, as Brecht suggested.

I’ve always been intrigued by the relationship between physique and character (Sarko’s built-up heels and Berlusconi’s hair dye surely tell us more about them than the speeches someone has written for them) and I admit to asking the touchy question about whether Boney suffered from small-man-syndrome. Andrew Roberts’s slightly shirty response was that Napoleon was of perfectly normal height. “He was as tall as me,” he exclaimed in outrage, as if that settled it for good. Roberts is 5ft 6in. One of Prince Hassan of Jordan’s daughters in the audience later argued (about Napoleon’s human rights record) that it was wrong to judge historical figures by the standards of today. I suppose the same applies to Andrew Roberts’s height, and I’m sorry.

Having just spent several weeks being abused by poets for having the temerity to say that too many of them are far too precious, and conspiring at their irrelevance, I was thrilled to be able to see the emerging queen of performance poetry, Kate Tempest, in front of almost 1,000 people at the Queen Elizabeth Hall. (To give a sense of perspective, you can call yourself a bestselling poet if a mere 500 people buy copies of your book.)

Tempest is not yet 30, small and scruffy, a bit sweary, authentic to her fingernails. And she is completely joyous. I have never seen such a modest presence command such a great space with such energy and good humour. Her latest collection, Hold Your Own, is based on the Greek myth of Tiresias, the blind prophet who was turned into a woman. Translating the story from a Peloponnese mountainside to the sarf London suburbs is weird but works. Catch her if you can.