Photograph of the decade 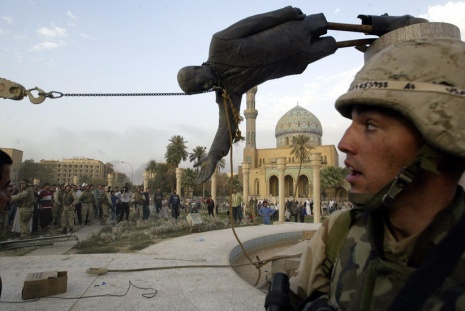 The Iraq war hangs over this decade like a very bad smell. The images – poor David Kelly leaving the House of Commons shortly before he killed himself; grinning American guards posing with their hooded, humiliated prisoners; little George Bush strutting on the deck of an aircraft carrier under that "Mission Accomplished" banner; the troubling indifference with which one saw the mass murderer Saddam Hussein having a noose put around his neck – haunt us even years after the events.

From the initial lies that took us to war, through to the summoning of clubby members of the House of Lords to conduct later "inquiries" that claimed so much and revealed so little, it tarnished everything it touched. The cost wasn't measured just in blood and treasure but in our ability ever again to trust governments.

For all Tony Blair's striding around with his new best friend (who can forget the excruciating "ball-crushing jeans" shots of the two of them at Camp David?), this was an American war, won, to no one's slightest surprise, by overwhelming American force. But – as the dodgy dossier revealed – it also disclosed the complex interplay between the reality of war and its representation.

I have chosen this picture of the toppling of a statue of the Iraqi dictator to remind us that not everything we saw in that war was what it appeared.

The event seemed to be the moment Iraqis freed themselves from dictatorship. But the hook on the left of the frame belongs to a US military recovery vehicle, the Baghdadis had been summoned by American loudspeaker, and minutes earlier a US marine had clambered to the top of a statue and draped Saddam's head in a Stars and Stripes.

That image represented the truth of the war: the most powerful nation on earth had destroyed a fly-blown tyranny. But it did not suit the political narrative. A horrified American psy-ops colonel watching the coverage somewhere in cyberspace ordered the marine back up the ladder, to remove the US flag and replace it with an Iraqi one. Then, to allow the crowd to go to work with their sledgehammers, the marines pulled the whole thing down.

We shall probably forget the Iraq war in much the same way as we have forgotten the British humiliation in Mesopotamia in the first world war. But it ought to make us a lot more wary about everything we see and hear when powerful states decide to pursue "vital interests".