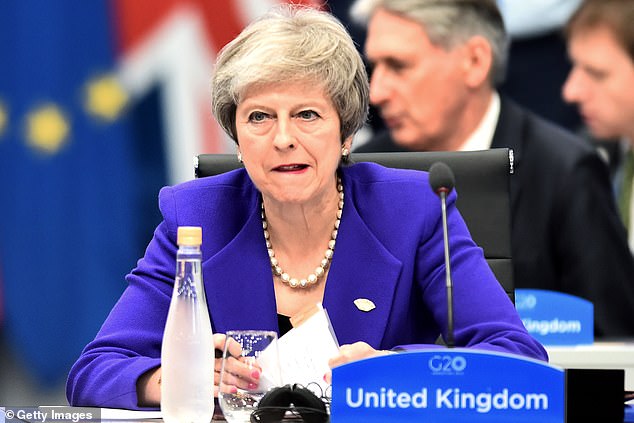 Outside the Palace of Westminster on Thursday I saw the driver of a massive cement lorry wind down his window to bellow in an angry Geordie voice. His target? A rent-a-mob of anti-Brexit demonstrators.

‘It’s about time you learned to respect the decision of the working class!’ he roared.

What can he have made of the farce now engulfing Parliament itself? Or of professional politicians united in their conviction that when it comes to the most momentous decision to face us since the Second World War, they can agree precisely nothing?

The outcome of the 2016 referendum was clear.

By a margin of more than one million votes, the British people said they wanted to leave the EU. Yet more than two years later we are in paralysis, faced with a piece of paper that no one wants – and with seemingly no way forward other than to take the Prime Minister’s Deal.

When Mrs May says it is ‘far from perfect’ she is not exaggerating.

Can you imagine Winston Churchill allowing his negotiators to dance the hokey-cokey with a bunch of foreign bureaucrats and then expecting the British Parliament to agree to a half-in, half-out arrangement which continues EU control until the organisation feels inclined to give it up? And which, by the way, makes it impossible for the UK to strike its own trade deals?

To reflect the current mess, we would have needed a third choice on the referendum ballot paper reading: ‘I don’t like it, but I still want the EU to continue telling us what to do, if they can find some issue like the Irish border with which to be difficult.’

How, you might wonder, could any leader expect her party to acquiesce in an act of national humiliation?

Northern Ireland MP Jim Shannon, representing the fishing port of Portavogie – from the Gaelic ‘Port of the Bogs’ – is one of the worst orators in the House of Commons (a hotly contested title).

But when he told the House ‘I know codswallop when I see it’, he was speaking for many.

‘Codswallop’ is a kind way of describing the piece of paper MPs are being asked to endorse on Tuesday.

If there has been a better example of the failure of Britain’s political class in the last 50 years, I have somehow missed it.

The whole process has been mishandled from the very start, beginning with Cameron’s lazy choice of a yes/no referendum. Serious decisions need careful thought and action.

Then came the business of implementing the wishes of the voters, which was left to the drones of the political class.

Could the negotiations with the Brussels bureaucracy have been worse handled? My dog Derek could have made a better job of them.

We have got used to the Foreign Office selling the country down the river.

What is depressing is that 10 Downing Street might easily have assembled a negotiating team made up of some of the most accomplished business people in the world.

Yet the Government preferred to stick with the familiar collection of forelock tuggers, who opened talks by offering to give Brussels billions. Is it any wonder that we have ended up with a dog’s breakfast?

Then came the refusal to make any preparations for a No Deal exit, the sort of clean break that so many voters wanted, that Europe fears and which would have given us a decent negotiating position.

Was this sheer incompetence or, as many suspect, the deliberate foot-dragging of a Remain-dominated establishment?

Now we are in the throes of a parliamentary process that could fairly be described as contemptible.

The Government held Parliament in such contempt, in fact, that it refused to share the legal advice behind the deal it has managed to achieve. What sort of democracy is that?

Theresa May is now asking MPs to endorse a plan for which no one ever voted. She claims it represents all that was attainable.

What she means is that she was bested by a team of bureaucrats reporting to Jean-Claude Juncker, president of the EU Commission and a man with all the charm of a temperance society cheerleader.

How have we reached such a pathetic state of affairs? Once upon a time, the House of Commons was packed with people who had done something with their lives already, and entered public life to make the world a better place.

Of course, they differed about how to do it, which was why debates were sometimes – hard to imagine, isn’t it? – genuinely thrilling.

The Brexit debate, such as it is, has revealed how low we have sunk since politics became a lifestyle choice for deadbeats whose only achievement has been to strike an attitude as a teenager and not to grow up.

We have had no leadership to speak of. Mrs May’s secret weapon is that in an age of nonentities she is First Among Equals.

Her advisers know that the one thing Conservative MPs fear more than agreeing an appalling deal is a Britain governed by Jeremy Corbyn.

Should she fail to get her agreement through Parliament, what little credibility she has will be gone. And failure, as things stand, seems overwhelmingly likely.

I cannot see how she will avoid a vote of no confidence.

Even Mrs May, however, cannot match the complacency of that nitwit David Cameron, who plunged the country into this chaos in the first place.

Casually leaving the fate of the nation to the result of a referendum was a stupid thing to do, which catapults him into the top three of incompetent prime ministers.

Once upon a time we used to elect leaders who led and then took responsibility for their decisions – rather than retiring to their agreeable Cotswold homes.

That lorry-driver showed the way that Brexit has polarised the nation and the divisions are likely to continue for some time to come.

It is very depressing. If and when Brexit finally happens, there will be many ragingly disappointed people, including many of those who wanted to leave.

Certainly, those who voted ‘whatever happens, it can’t be any worse than what we have now’ will soon discover that leaving the EU is no panacea for the problems that Britain has allowed to fester for generations.

If we are to believe that pliant smoothie-chops Mark Carney, Governor of the Bank of England, and his reading of the tea leaves, Mrs May’s Deal will make some things materially worse.

Yet in the circumstances, there is probably nothing much to be gained by rejecting it. Why send a proven bunch of incompetents back to Brussels to plead for something better? Why on earth would the EU agree such a thing?

The core issue remains what it always was: sovereignty: the question of who governs us, to whom they are accountable, and how we can control them.

Theresa May used to be fond of saying that ‘Brexit means Brexit’. If she seriously thinks she has achieved that, then it is time for the men in white coats to call.

The sole optimistic note is this: however much of a trap the Backstop might seem to be, a sovereign nation can do what it likes.

Parliament can make or unmake any law, including a treaty with the EU. So this is not the end of the story.

But to have any sort of truly happy ending, we need a better calibre of politician than the current sorry lot.

Article in the Mail on Sunday.